Bicycling is one of my first passions. I remember I was a teenager and I had my first 10 speed, I would go out riding for hours on end putting hundreds of miles on my bike. And then in my early 20’s I began doing triathlons and again putting thousands of miles on my Cannondale. When I saw this video on Google video today, it reminded me of the feeling of freedom that first drew into the world of bicycling.

While looking through some up comming races in the Tampa – Clearwater- St. Petersburg area I found this “The Sand Key Triathlon Training Program“. While it may seem a little pricey @ $600 it seems to be a fairly complete “one stop shop” for prepairing you for their sprint distance triathlon.

The clinic takes you from beginner to well prepaired over the 12 week span. It starts on June 26th and the race is on September 25th 2005. There are weekly seminars as well as weekly group training events. They are also putting on 2 free workshops (July 30 & August 27), if you are not interested in the whole class.

As I start to gear up for my triathlon season this summer you will see me writing a lot more here, as was the case last year, about triathlon and fitness in general.

I frequently am asked if there are shorted “female only” triathlons. There are several great series that are put on my Danskin and Reebok that I know women who have competed in and highly reccomend these races. I came across this in an email the other day and thought I would post it here.

These races are (from what I hear) great for women that want to just do a triathlon without the competitiveness that sometimes gets infused into the sport.

I had planned to post something different tonight but this was just a little too amusing to pass up. I just finished watching the Tour de France Stage 17. It was absolutely incredible! Lance won by over one whole minute on an average 11% grade climb up L’Alpe d’Huez from Bourg d’Oisans.

This is not news, just about everyone that will pick up the sports section tomorrow will know about this. What I found funny enough to post about was that while showing Lance riding up the mountain side they showed an arial shot. I could clearly read some of the painted words on the roadway, some of which were in English. The one that caught my eye was, “Lance, Rip Their Balls Off!”

Ever feel that you are running through some Escher drawing? 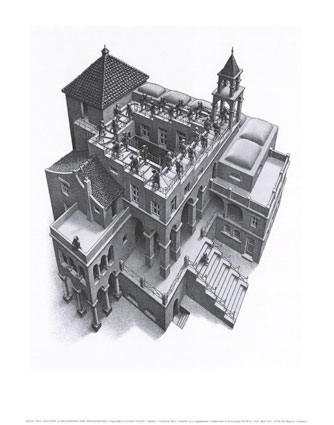 That is kind of what it felt like to me at the Clermont race the other weekend.

I did have a pretty good race though, at least according to the timing system. I was some-how kicked in the chest while starting the swim & I had barely trained for any of the events. I knew that this race was going to hurt… a lot. This was more or less a race to prove to myself that I could still do it (race), and to motivate me to train more.

I rode out there with Land Heintzberger, a really cool local elite (soon to be pro) triathlete. The results are available on the CFT Sommer Sports site, or on this server.

Overall I have to say that it was an excellent race. Well organized and a great course. My only complaint about the entire thing was that there was a mix up with my number initially. The bike number didn’t match the other numbers that I was given. My Chip was assigned number 332 and I had 332 for my run number, but the vinyl sticker for the bike was 331. Easily fixed though. I had to walk past the transition area (from body marking) to the registrations and packet pick-up tent to get a repaired number from the event staff then walk back past transition to the body marking area again. Ok, I guess that is two complaints. The workflow could be a little better organized, and a little closer attention could have been paid when assembling the packets as I was not the only one to have this problem with the bike (or run) number.

Friday I went for my usual bike ride over by Northshore Pool. I had a great ride of around 20 miles. I held a great pace (for me) of 19.7mph. I felt absolutely great. So great in fact that after my ride while I was warming down I was screwing around on the bike trying to do wheelies… Needless to say after several (fairly successful) attempts I crashed. I just pulled a little to hard and then put a little too much power into the pedals and I went over backwards.

I knew that eventually I would crash, but that is not what is really getting at me. After I got up and checked to make sure I was all in one piece without any unusual new bends in my arms or legs. I checked my bike and everything, even the Derailleur
was intact. When I was packing all of my equipment back into my car I was, of corse, a little distracted. I neglected to pack my front wheel, which I must remove for the bike to fit into the car. I had made it about 3 minutes down the street when I realized the bike was there but the front wheel was missing. Two minutes later I was back in the parking lot. The 2 women that were packing their bikes into their cars when I left had gone, and so had my wheel.

I checked with the pool staff, they had not had anything turned in.

The irritating thing is that whoever would steal this probably has a bit of money. Last I checked Target’s bikes didn’t accept 650c wheels!